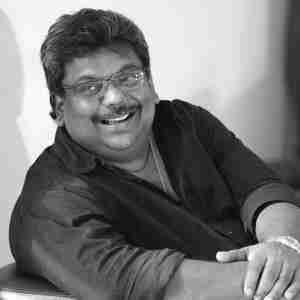 By
Tony Mariadass: Contrary to the common belief that the life of sports journalists is a bed of roses, it is indeed laden with thorns.
Having been a sports scribe from the rookie stage at the age of 19 and clocked-in 40 years on the beat, I have had my share of unpleasant episodes.
However, I have no regrets making sports journalism my profession and would not trade it for any other. One learns early to take the rough with the smooth.
My first taste of the rancour that can stem from covering sports occurred when I was a stringer for the Malay Mail in the late 1970s. The late veteran sportswriter Francis Emmanuel asked me to follow-up on a story he was doing.
I had to go to the PJ Club to obtain information on the suspension of a senior committee member and to photograph the suspension notice on the club’s notice board.
Being a rookie I was naturally excited about the assignment. Armed with a camera, I walked into the club to look for the notice board and found the suspension notice. I started to take pictures. Before I knew, a man tapped my shoulder and asked what I was doing. When I told him, he went berserk.
“Who do you think you are? he yelled. “Walking into a private club and taking pictures without getting any permission? This is a private matter and you have no business here,” he berated me.
He demanded I hand my camera to him. I was trembling and wondering what I had got into.
The man took the camera, pulled out the film and told me to get out of the club before he called the police.
I rode my ‘kapchai’ back to the office only to be greeted by Francis who demanded to see the pictures and information from my recce. When I told him what had happened, he laughed.
“You thought you can walk into the club and just walk out with the pictures. This will show you there are many obstacles in our job and you have to work around it,” he said. Next day, Francis had the story in print. From then on I was very careful about getting stories and made sure I adhered to procedures and rules. Francis also had another peculiar way of bringing rookie reporters down to earth: he would not give you the byline you requested.
For my first story as a stringer – on a former international footballer plying his trade in Hong Kong he gave my name as
T. Mariadass.
Other bylines included Anthony Mariadass, Tony Mariasoosai! All these before he finally gave me my requested byline: Tony Mariadass. Then we had to deal with officials and athletes who seek you out for the publicity, but if you write anything negative or expose their shortcomings, blunders, or if your views do not go down well with them, they will blow their top, avoid you, bar you from covering their events, write letters to your editor accusing you of being biased or influenced by other officials or parties. You get screamed at, asked to get out of their offices, barred from training grounds and stadia, have people heckle you, and in some instances even threaten you.
I have been asked to leave the training ground at Penampang Stadium in Sabah and refused entrance to the Likas Stadium with my press accreditation and had to buy a ticket to gain entry. 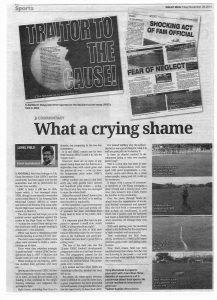 Then I was not allowed to use the media room facilities, thus forcing me to stand outside the room and led by security officials to the seat indicated in the ticket I had bought to gain entry to the stadium.
I had to go through all this because a top official of the Sabah FA was upset with an article I had written. Of course, over time all is forgotten and we are friends again. Incidentally, the official is a Cabinet minister today.
Then we have officials who are supposed to be guardians of their sports but act otherwise.
A prominent official (now deceased) in the FA of Malaysia – not an elected office-bearer but head of an important sub-committee approached the Ulu Klang Recreational Club (UKRC), asking them to surrender their field and clubhouse in return for a smaller plot of land which is government property and already had a community building on it. The official, who is a property developer, had told UKRC president Andrew Gopal that the UKRC ground was suitable for a condominium project.
URKV had rejected the offer but the developer’s company working through the village’s (Hulu Kelang) security and development committee tried to acquire the land.
It was astonishing that while the number of playing fields in the Klang Valley is dwindling, someone in FAM was willing to be complicit in reducing the number further.
While this news was reported in the The Malay Mail on 20 November 2002, what was not reported was that Andrew was offered by the official two condo units if he agreed to let go of his club’s grounds. Andrew, who is battling to regain the UKRC ground, maintains till today such an offer was made.
“I flatly refused the offer. I was disgusted and walked out of his room,” said Andrew when contacted recently.
“We are still homeless without a ground of our own and continue to host our annual veterans’ tournament at rented venues but we have not given up on getting the field which rightly belongs to us.
“The FAM official has passed away and his plans did not materialise.
But others have similar plans and we have still not got back the field which was seized from us by the Ampang Jaya Municipality.
“Things are no different between Barisan Nasional and the Opposition. In the end they have their own agenda and denied us the right of ownership to the field,” said Andrew.
The battle continues. While some officials have brought shame to their sports, there are others who made a difference – for the better. But things being what they are, there is no room for good officials.
As the year 1996 drew to an end, it was remembered in football when
three godfathers of the game had the curtains drawn down on them in their respective states.
Two were unceremoniously booted out while the third suffered the same fate soon after.
The three were former Kuala Lumpur FA president Tan Sri Elyas Omar,
former Johor FA deputy president the late Datuk Suleiman Mohamed Noor, and Kedah FA deputy president the late Datuk Ahmad Basri Mohamad Akil.
All three had done a great deal for their state FAs and for the rise of soccer in their states.
It is through their time, dedication, vision and love for the game that their respective states hogged the limelight in Malaysian soccer.
But sadly, all three were dumped after they lost their influence following loss of their government posts. What they had done over the years was forgotten and they were made scapegoats for the decline and poor financial standing of their associations.
The three ‘Godfathers of Football’ became victims of the winds of change and politicking. While sports officials are part and parcel of our sportswriting, wives of officials, too, have played a role in making a sports journalist’s life miserable.
Experiences of being told off or phones slammed by wives of officials when negative articles were written on their husbands or even the associations they helm were normal.
But officials like Tan Sri Elyas made us forget such exasperations by apologising profusely on behalf of his wife when I had brushes with her. Elyas was magnanimous.
Then we had a wife of a FA president (Datuk Mohamad Aini Taib) who acted like she was manager of the state team.
It was a common to see her walking into the dressing room before the game, at halftime and at the end of a game, to talk to players and give her two sen worth of advice, not to mention a scolding too.
It has indeed been a journey for me, but despite the occasional bad experiences, the memories have superseded the unpleasant encounters to make an unforgettable experience I will cherish forever.
But like we say in our trade, we are only as good as our last byline!

Toddy Goal Does It! 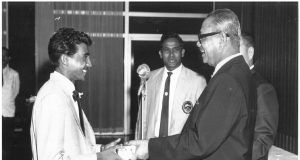