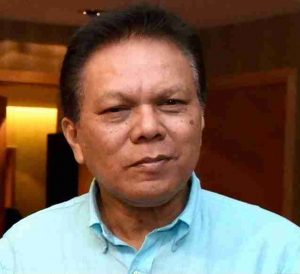 By
Hisham Rahman: Rugby stalwarts Shahid Majid, Ariff Omar and Kamaruddin Sulaiman who broke away from Cobra due to lack of playing first team rugby, decided to form a new team to compete in the Selangor league in 1974.
They managed to play under the banner of the PJ Club and became Selangor Anchor League champions and the Guinness Cup knockout champions in 1974.
After becoming champions, however, the PJ Club did not make good their promise to provide jerseys and balls. It was a sad experience indeed as their plans to represent the champion club of Selangor to compete in the All Blues tournament in Seremban was aborted due to lack of funds.
The club had to manage on its own, members stumped up their own money and the true spirit of togetherness was instilled.
That was the situation of sports generally those days when it was initiated and driven by members, dedication and love for the game. They only ask for balls and jerseys to play without any monetary benefits and yet they became champions!
CLUB X – 1976/77 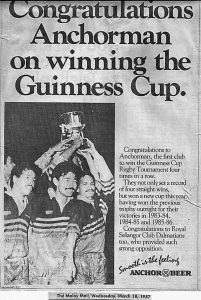 During the transition period and without any sponsor support the Club participated in the SRU league and registered as Club X with ‘X’ as we know in our studies of mathematics in schools, denoting the unknown factor. The Club X became champions again in the Guinness Cup. This was noticed by a gentleman, Harun Ibrahim, and a director of Harga Industries, who was impressed watching Club X beat the RMAF Blackhawks as they fought back to win 10-9. He offered his company’s executive lounge as the base and provided the team with jerseys, stockings and balls. His generosity is till today appreciated by the team. At the same time Ahmad Mahmud, who was a sports officer with Universiti Kebangsaan, granted permission for the team to train at their field.
Players were recruited from school leavers, universities and colleges. Those from out of town and without jobs were assisted in finding employment.
Their hand work was realised and by then Club X had more than 40 players to choose from and managed to field two teams – one each in the Senior and Milsum leagues.
ANCHORMAN CLUB – 1977
About the same time Malayan Breweries Ltd or MBL, the manufacturer of Anchor beer, were heavily involved in sponsoring sports events ranging from darts to soccer to rubgy.
And the theme in their advertising campaign was the ‘ Anchorman’ — a faceless man, successful at his job, superb in his chosen sport and drinking his choice of beer.
This scribe played fullback for Club X and the national team. I was then the Anchor Draft Area Sales Manager, thought that the faceless Anchorman shared a similarity with the unknown Club X .
Also in rugby, the player in No 8 position as the link between the forwards and the three quarters, is aptly called the anchorman. I spoke to Lee Kee Hock, the general manager of MBL, and arranged for his colleague Loong Wei Hin to meet with Club X pioneers like Shahid Majid, Ariff Omar, Rosnan
Shafie and Halim Rahman and the Anchorman Club was born.
Finally, this one club which is successful on the rugby pitch, found its handwork noticed and
MBL undertook to meet all its financial and administrative responsibilities.
Since 1978 the Anchorman went on to win the International Penang 10s, beating the Australian Ferrets, became Guinness Cup champions again in 1979, beating the favourites Malaysian Police, and the Anchor League trophy, defeating RMAF Blackhawks.
1979 was indeed a memorable year for Anchorman as a club completed a treble by being champions in rugby, in cricket for the Navaratnam Shield and in football by being the Selangor State Under 16 champions.
Then in 1980 came the trophy they badly wanted, the Anchor Rugby League, a competition sponsored by their sponsor MBL. ANCHORMAN’S
CONTRIBUTION TO
RUGBY
Anchorman became a much respected club not only because of the people behind it, but because of their actions and achievements within a short space of time.
It is not surprising to see most of Anchorman players donning either national or state colours in their respective games. In fact, in 1980 at a time when Malaysian rugby found it difficult to beat the Thailand national team, the Malaysian squad which consisted of 11 players from Anchorman Club beat Thailand and that, too, in Bangkok.
The growth of rugby in the 1980s can be attributed to Anchorman as players that were recruited to play with them went back to their respective employers to start their own teams — Maybank, UMBC, Bandaraya Dragons, where Shahid Majid, Chong Chang Kiang and Wak Yassin Said respectively were instrumental in getting things going, to name a few.
However, when the pioneers of Anchorman established the KL Rugby Union, most of them regrouped and KL became a rugby powerhouse winning for them the pinnacle of Malaysian rugby – the HMS Malaya Cup and the Agong Cup. The Anchorman were also good organisers as their members successfully organised the historic Crescent Cup Rugby Championship 2015 in Malacca, a first of its kind in the world for the rugby playing Islamic nations under the Organization of Islamic Conference.
PASS IT BACK Presently, the pioneers of Anchorman are actively involved in rugby in one way or another. Nik Azmi is the president of KL Rugby, an union which Anchorman is instrumental in setting up. Rahman Khalid and Nasser Jumat have successfully registered the Club with the ROC and are the president and vice president respectively.
There are Anchormen in Johor Baru, Ipoh and KL actively into rugby at grassroots. In fact, in October 2017 an Anchorman Under 12 team sponsored by our own T Putra Harun Jumat from JB won an international U12 competition in Singapore.
This scirbe also became the first Malaysian to be elected to the executive council of Asia Rugby where he served for two terms (2011-14) and brought the 15s Asian Rugby Championship to the PJ Stadium to provide rugby fans starved of watching Malaysia play an International 15s game among other Asian national teams.
Thanks to the game of golf, pioneers still find time to recall the good old days. The rest as they say is history and we are glad to be a part of it. Thank you, all Anchorman who made it all possible. 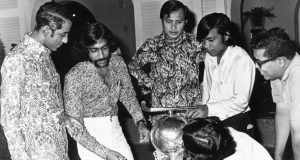