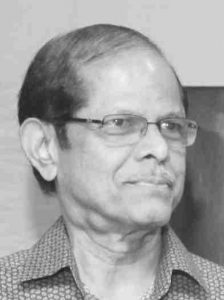 By
R.Velu: When I was asked to write an article for this Malaysian sports book of untold stories, reminiscences, personalities and events, I was a bit reluctant. What could a has-been sports journalist at the closing chapters of his life write about that has not already been written.
Then I thought about my association with sports from childhood till now – the wonderful personalities (heroes and officials) I had the opportunity to meet and interact with, the incidents and challenges that I faced as a journalist and later as a sports marketing consultant. The evolution of sports from amateurism to professionalism to the multi-billion dollar business it is today.
As I thought about it, I was slowly convinced that I had a story to tell about how the people, incidents and challenges, many pleasant and some nasty and forgettable, helped shape, build my life and gave me many opportunities and wonderful memories.
In short, sports was (and is) my university, my career and my life.
Growing up in Penang, like any schoolboy I had my dreams of becoming a champion, but I was nothing more than a backyard sportsman competing with neighbourhood boys in football, badminton and cross-country races.
But my interest in sports ran deep. There was no television or live broadcasts at that time. We had to get our daily dose of sports fix by reading the newspapers or listening to Radio Malaysia’s live commentaries of events like the Malaysia Cup (Malaya Cup) and Thomas Cup; or BBC’s live radio broadcasts of the English Football League (Division One – the top league then). 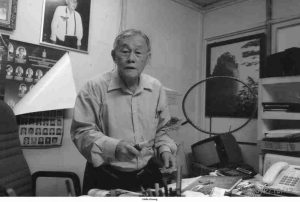 Names like Abdul Ghani, Arthur Koh, Stanley Gabriel, Edwin Dutton, M.Kuppan kept popping up during live radio commentaries of Malaya Cup (later Malaysia Cup) football matches. When All England or Thomas Cup badminton events were on, attention was switched to headline–grabbing heroes like Eddy Choong, Teh Kew San, Lim Say Hup or Ng Boon Bee. All Malaysia’s early sports heroes.
And I remember how thrilled my friends and I were when Penang hosted a Malaysian athletics meet at the City Stadium in Penang in the 1960’s. We finally had the chance to see live in action the top Malaysian athletes of that era, headed by Asian sprint king Mani Jegathesan, in his trademark sun-glasses and thigh tightly strapped.
Never in my wildest dreams would I ever have thought that I would meet face to face many of these amazing sports heroes or interview them. But it happened and gave me many wonderful moments to cherish and remember.
After finishing school, I bummed around for a while, jumping from one small job to another, before finally ending up as a sports reporter with The Star in Penang in the mid 1970’s and later moved to Kuala Lumpur.
My first major assignment was covering the 1977 South East Asian (SEA) Games in Kuala Lumpur which gave me the opportunity to meet and interview the top athletes and officials in the region of that period. 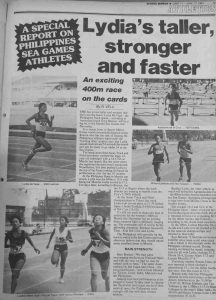 IBF – WBF TUSSLE
One official who made a great impression on me in the early days of my reporting career was the late Tan Sri Khir Johari, President of the Badminton Association of Malaysia (BAM). Despite the high positions he has held in government, business and sports, Pak Khir – as he was affectionately called by many – was very simple and approachable.
In the late 1970’s, world badminton was split between the International Badminton Federation – IBF (now the Badminton World Federation) and the break-away World Badminton Federation led by China because of the two China issue.
There was a day when I had to interview Pak Khir on this IBF – WBF issue and Malaysia’s stand on it. I didn’t have an appointment. But I took a chance and went by taxi to his house in Damansara Heights. Pak Khir was about to leave the house for a meeting. But when he saw me, he welcomed me inside and gave the interview.
Pak Khir was a man who stood by his principles and convictions. When the government then directed the BAM to leave the IBF and join the WBF, Pak Khir stood firm with the IBF. He was convinced the WBF wouldn’t last and it would be better for Malaysia to stick with the IBF. He was proven right as the WBF subsequently wound up and China, along with the other WBF members, joined the IBF.

PUNCH GUNALAN
Malaysians have played important roles in sports in the international level as players, or administrators. One man who left a deep impression on me, both as a player and official is the indefatigable and unforgettable Punch Gunalan. At the height of his playing career, I didn’t have the chance to meet him. I only got to know him when he was a coach, and official in local and world badminton.
Punch left an indelible mark on his chosen sport as a brilliant player, capable administrator and a kingmaker in world badminton. He will be remembered as the man who brought the Badminton World Federation (then called the International Badminton Federation) headquarters to Malaysia, engineered the change in the scoring system to make the sport television friendly which in turn brought in the sponsors.
In spite of his success as a player and official, he remained an affable, ever helpful, friendly and accommodating person till his final days when he passed away in 2012.

REPORTING —
NOT HAZARD FREE
Sports reporting is not hazard-free. Like many of my colleagues then, I had my share of threats of being sued or physically harmed because someone did not like what I wrote. One of the silliest threats I received was when I covered the 1981 World Cup badminton tournament at Stadium Negara. I wrote some articles and a profile piece on the eventual winner and All England Champion Prakash Padukone of India.
Someone apparently didn’t like what I wrote. During the course of the tournament, I received a letter by mail, saying: “You are writing too much about an Indian player. Remember Sentul May 13. History will repeat itself.”`I was puzzled and shaken by this. Here I was writing about an incredible player, very disciplined, humble and highly motivated. A sportsman who should be held up as a role model for our own youths. Yet, I received a note like this. When I showed this to my editor, he told me to just ignore it. 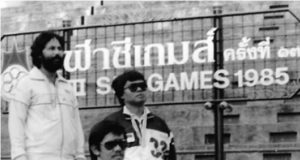 Too Good To Be True