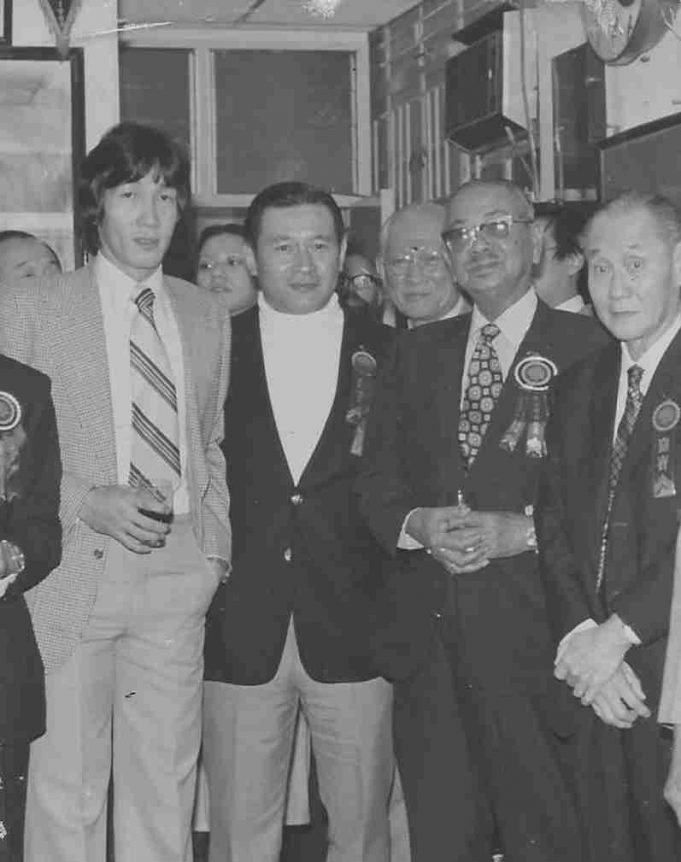 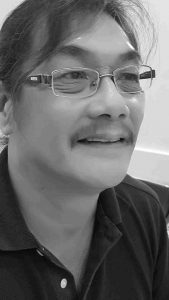 By
Gerald Kwok: When you live with a legend called Chow Chee Keong for so many decades, you lose much of the awe and it has to be deliberately recalled. Worse still when you’re born into my family, surrounded by other “legends”.
As son of the late Datuk Kwok Kin Keng, former Honorary Secretary of the Football Association of Malaysia (FAM) and one of a small group of pioneers who brought Malaysian football and the FAM up from obscurity to probably the most “heavyweight” and strongest established national sports associations in the country by the time of his passing.
Sure there was my Dad but there was also Tunku Abdul Rahman, Malaysia’s first Prime Minister. I do believe that Dad, whom the Tunku affectionately called Ah Keng, always tried to hide me, his source of eternal embarrassment, from view all those evenings I drove him to pre-Council briefings at the Prime Minister’s residence in Jalan Kenny.
But the Tunku always wanted to know – “Who brought you here, Ah Keng? Oh! Your son.” – followed by a cheery wave in my direction.
There was also Uncle Pete – Datuk Peter Velappan – probably the highest-achieving Malaysian ever in terms of status within AFC and more so within FIFA, who recently reminded me that he was already working with Dad .
And, during innumerable tea-time sessions at our old Conlay Road house, all the likes of Uncles Chye Hin, Govinda, Boon Lay, Kee Siong, and the rest, would never tire of swopping stories of glory days past when all my kid brother Dennis wanted to do was wolf down more of those famous Imbi Road currypuffs and doughnuts, without being obvious.
Then along comes this legend Chow Chee Keong. Join the queue, dude.
That he was a legend, there is no doubt. But, for me, it wasn’t about hype and glory. And because of this, my take on Chee Keong will never be anything you would read, hear about or see on TV.
Chee Keong remains one of the strongest characters and forthright personalities I have ever known or will have the privilege to know. For me, it wasn’t about his audacity and absolute, supreme confidence, the kind that allowed him to somehow pluck the ball from the very toes of that even bigger legend – Pele – with a gaping goalmouth on offer, during an exhibition match in Hong Kong.
Instead, allow me to present another take on the audacious Chee Keong. As our Dad headed up Malaysian football in his time, we, his kids, used to pretty much have the run of Stadium Merdeka. 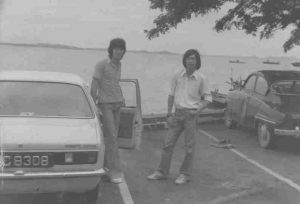 One Merdeka Tournament – I think I was around 11 years old – we were, as usual, hanging around the Secretariat in the Stadium, waiting for Dad. I can’t remember what I was playing –definitely nothing intelligent or productive – but I do remember looking up and seeing this great, green-clad, muddied form checking out my sister Christina.
I instantly flashed red, burning with indignation. What absolute cheek! Who is this muddy buffalo and what makes him think he can just go up and chat up my sister?
Then I look past the mud and I go…. “Whoaaa! That’s Chow Chee Keong!” And promptly had nothing further to say.
From that point, began a story that has been more than 50 years in the telling, a story coloured with its share of Romeo and Juliet style star-crossed lovers stuff.
My Dad was absolutely possessive of his favourite daughter and no way was just any old legend going to come by and sweep her away. No way, no how. So it was tricks aplenty all the way. I can’t give away any trade secrets here but it would include things like us telling Dad, “Sis and us gonna watch a movie today ” which movie we’d never, ever, have to pay for but it would always be me and Denis watching the movie from the front rows and Chee Keong and Christina watching from the back. Like the very last row, right at the very back.
Those years were also years stuffed full of learning, from spending time with and observing first-hand the character traits of one of the strongest men I knew.
Chee Keong was one of the best guys ever to watch football matches with. He could read the game so well he would tell me unerringly this is how the attack will proceed and defenders will have to watch out for this and if they don’t, then this is where the goalkeeper should position himself to secure his goal. It was as if he could see the future and provided live tactical analysis I have never heard, even from the super-pundits on live English Premier League broadcasts.
One game, in particular, he always delighted in watching with me, the same game I always had the deepest dread of watching but he never let me get away. That game was Burma vs South Korea, on the occasions they were pitted together during Merdeka Tournaments. Burma would line up in brown and South Korea in red, which for someone like me with red-green colour blindness, meant they looked like they were wearing identical colours. Chee Keong knew this and he would be beside himself at the look of utter confusion on my face and especially when I’d be shouting, “Aiyoh! The goal’s the other way!” 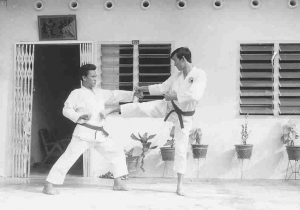 But one of the games that I did most like to watch was Burma vs Malaysia, with two of Asia’s best goalkeepers on the same pitch: Chee Keong for Malaysia and Maung Tin Aung for Burma. Not many know they were very good friends off the pitch.
Tin Aung called my sister from Burma immediately upon hearing of Chee Keong’s passing – and they had the deepest respect for each other’s prowess. But that never stopped them, even in the tightest of games, from having their private round of one-upmanship.
Chee Keong would pull off a tremendous flying save, then get up and I could almost see him look clear down to the other penalty box as if to say, “Top that, buddy”. Then, on Malaysia’s next attack, Tin Aung would pull off an equally spectacular save, get up and look clear to the other side as if to reply, “Now you top that”.
There was much more serious life learning, as well. Chee Keong was ever the sharp dresser, whether to a glamorous celebrity event or to famous satay and ice kacang at the old Campbell Road open-air stalls, a favourite stop after watching matches at Stadium Merdeka. Never fasten the top button of your suit jacket, never push your shirt in completely flat but leave just a neat tuck edge over your belt. I never quite had his knack. He and his buddy Chak Sum used to practise Shaolin Tiger and Crane styles in addition to Karate at the old dojo on one of the back roads off the Loke Yew Road. He laughingly told me it was to outsmart Karate guys with (for whom he had little respect) but this training kept him always alert and watchful – always keep your back protected, always position to see everything in the room in front of you.
Whatever he would share, I eagerly gobbled up and even this abridged version was enough to get me through numerous weekend bar brawls during my student days in Brighton.
Practically everyone who truly knew him would tend to describe him using “humility” or “a very private man” or similar. I think it was more that one had to gain his trust – he never gave his trust away, you had to earn it. Chee Keong never said much when meeting someone for the first time. It wasn’t shyness or disinterest in the person. Rather, as he listened, he was “reading” you. Your eyes, your face, your stance. He was looking at you but he was seeing all of you. Two sentences later, he already knew how much or how little he would trust you.
The one thing he did trust implicitly was the strength of his mind and body, honed by years of rigorous training to do exactly what he wanted it to. Like all true sportsmen, he dedicated himself to the discipline and the craft of his sport. He trained to get the best from himself, whatever the sport he had chosen. I could see him commit to the grind, endless hours repeating every little action again and again till it was perfect.
He always knew talent only takes you so far but it takes hard work and lots of it to rise above the ordinary. For Chee Keong, to be the best he could be wasn’t an ego trip – it was his way to represent the best of the game in himself and his efforts and, in so doing, be absolutely true to his sport.
Honour and respect for his discipline and craft was everything to him. Which was why he was dead set against any form of impropriety like match-fixing. Indeed, he was very proud that he never, ever, took one cent in that way. Anything that compromised his integrity and dishonoured and disrespected his discipline and craft was anathema to him. He took it very seriously.
Honour. Dedication. Discipline. For me, that was what the legendary Chow Chee Keong was all about. The stuff of his legend would never be hype and glory but that of force of will and steely resolve. A strength of character and an uncompromising integrity.
Relentless determination to use every iota of his talent to carve his pathway out of the “wrong side of the tracks” he had been born into. Unwavering devotion to duty and sacrifice to use whatever he earned to fund his younger brother through University and give him the start and the life Bill Chow now has in the USA.
Most of all, his legend was that of an unconquered spirit that rose above anything that life could throw at him …. disappointments, false promises, the fickle and temporary mirage that is fame and superstar status. That was my legend.
Compared to him, I was like some pampered princeling who had lost his way. Yet he loved me and he shared with me his hard side through my growing up and part of that steel helped me conquer my own disappointments, false promises and fickle friends.
Chee Keong has ever been more a big brother to me than brother-in-law. The hole you leave inside me, brother, I cannot fill. Travel well and go in peace.
Legend. Brother. Forever. 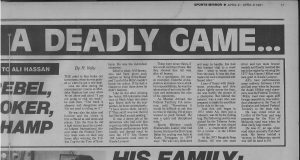